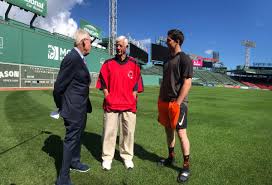 In his initial game at the ballpark his granddad called home for a long time, San Francisco Giants outfielder Mike Yastrzemski homered in the highest point of the fourth inning of Tuesday’s game against the Boston Red Sox in a minute that couldn’t have been scripted better. The solo shot was the 238th grand run by a Yastrzemski at Fenway Park and the initial since Carl Yastrzemski went deep against Moose Haas of the Milwaukee Brewers on July 31, 1983.

It didn’t take long for Mike to feel the history as he walked into Fenway Park before Tuesday’s game. The recollections all returned rolling. As a child who experienced childhood in the Boston area rooting for the home team, missing of the way that his granddad was a city symbol, the more youthful Yaz recalled the majority of the games he went to at Fenway growing up – from the 1999 Home Run Derby to the World Series keeps running in 2004 and 2007.

He contemplated every one of the occasions he’d spent through with his family at Fenway Park, where the Red Sox resigned his granddad’s No. 8 of every 1989.

“Playing here is cool and I see it as part of my job and something I’ve always wanted to do. That doesn’t really overwhelm me,” the more youthful Yastrzemski told the media before Tuesday’s game. “To do it in a setting where I have so many fond memories with friends and family and have them be able to be here, it’s special.”

Yastrzemski got a pleasant round of applause from the Fenway swarm when his name was reported. He struck out swinging in his first at-bat and attracted a walk his second at-bat, scoring San Francisco’s initially kept running of the game on a Stephen Vogt twofold.

The Yastrzemski family doesn’t normally accumulate in the season, however the series in Boston will be the special case. The senior Yastrzemski, who once in a while shows up at Fenway Park put something aside for a first pitch before a World Series game, met with his grandson on the field before Tuesday’s game, giving Mike tips on playing the Green Monster. He told the Boston Globe on Monday that he intended to do a TV interview with his grandson preceding Tuesday’s game however would leave thereafter to watch on TV.

“We’ve got everything planned for Wednesday,” Carl said about the family’s plans for Fenway. “We thought about going in on Tuesday, but decided against it. He’s going to have enough people bothering him and it might be a little easier on him if I’m not there watching him.”

In a interview with NESN on Tuesday, Carl said the most ideal way he can describe the size of this moment is to contrast it with the season he was named American League MVP and drove the Red Sox to a World Series appearance against the Cardinals.

“The only way I can make any type of comparison would be to compare the ’67 season to this moment,” he said. “To play 700 games in the minor leagues, he always said he’d make it. I think that’s what I’m proud of the most, because of his sticking to it, not complaining. He’s a great kid, which is more important.”

Goliaths manager Bruce Bochy, a 14-year veteran manager, chose to play into the occasion, placing Mike in the leadoff spot keeping an eye on a similar left field as his granddad.

“To be honest, sure, I wanted him to play left field tonight. He gets the nod there. It’ll be a cool moment,” Bochy said. “I’m sure for a lot of people here, it’ll be a great reminder of all the great things his grandfather did, bringing special memories into their minds. I look forward to it. I had a chance to meet Carl today and he came into the clubhouse and we sat and talked for a while and so this is cool for everybody. The fans here in Boston, but us too.”

“It will be the first time since 1983 that the name ‘Yastrzemski’ will be announced,” Carl, presently 80, said. “It’s definitely going to be emotional. To see him come into Fenway Park where I played for 23 years, to have his name announced, that will be a great thrill for me.”

The more youthful Yastrzemski grew up an enormous Red Sox fan, refering to Trot Nixon, Pedro Martinez, Nomar Garciaparra and Manny Ramirez among his preferred players growing up. Mike conceded that it wasn’t until secondary school, turning 15 years of age, when he started to acknowledge everything his granddad achieved in the place where he grew up.

“When I turned 23, that was the big shocking moment, was that for my entire life he has showed up to Fenway Park every day,” Yastrzemski said. “That blew my mind. I can’t picture 23 years’ worth of Major League Baseball experience. That’s when that really set in.”

Yastrzemski will have more than 150 family and friends going to the series, including friends from his secondary school institute of matriculation, St. John’s Prep in Danvers, Massachusetts. While Tuesday speaks to a fantasy work out, it’s been a long way for Mike, who went through six years in the Baltimore Orioles’ small time system before getting his chance in San Francisco this year, where he’s hitting .265/.324/.509 with 19 homers. His moderate move to the majors has helped him welcome this minute somewhat more.

“Through the long path it took me to get here, I started to understand which things are important and which aren’t so I could stay focused on the things that have really grown to matter and the story that needs to unfold here,” Yastrzemski said. “It’s special for my family and my grandfather as opposed to keeping it on me.”

At the point when that minute comes, when Mike Yastrzemski hears his name just because over the Fenway speakers over 58 years after his granddad played his first game in Boston, he would like to pause for a minute to value all that it took to get to this minute.

“That’s the one thing I’m unsure of how it’ll affect me. Everything else I’ve got a good grasp on. Hearing that will probably be emotional but that’s probably the moment that I need to allow myself to enjoy and take my time and say ‘this is special,'” Yastrzemski said. “This isn’t just special for me. This is special for anyone who saw my grandfather play and saw the Red Sox play over history. They have some tie to him because of his historic value to the organization. While it is special for me, I need to let it be special for everybody else as well.”